One hot afternoon, a new Scout on his first outing ran through the campsite screaming loudly and holding his crotch. Despite the commotion, the other boys barely noticed because they were occupied trying to start a fire with a magnifying glass. After a few seconds, however, the Scoutmaster realized what was wrong and said to the closest adult leader, “Better get the first aid kit, we need to remove a tick.” It took us more time to chase the boy down and get him to cooperate than it took to pull the tick out of his body.

Ticks have acquired many merry monikers with campers, hikers, and other outdoors-goers over the years, few of which are suitable for printing here. More than almost any other critter—insect, mammal, or reptile—these little arachnids have the potential to “tick off” and terrorize even the most level-headed soul. And, more to the point, they can pose a serious health concern—one that all too many campers and hiker are apt to underestimate.

There’s a lot of confusion and misinformation out there with regard to preventing tick bites. Where are they most commonly found? How to avoid ticks while hiking or more specifically how to avoid tick bites? What attracts ticks to humans? What exactly are we supposed to do once we have been bitten? Are all ticks the same?

In this article, I aim to answer the above questions and offer additional insights into how to deal with ticks on your trips in the outdoors, from pre-trip precautionary measures right through to what to do if you’re bitten.

But let’s start off with our usual do’s and don’ts:

Check out our other guides on health & survival:

Technically speaking, ticks are not insects but arachnids that commonly live in a variety of outdoor locations and feed solely on the blood of their hosts—humans, mammals, and rodents, for the most part. Many different types of tick exist. Each type has its own geographical distribution, can carry different diseases, and are more or less of a threat at certain times of year.

Below, I’ve added a list of the most common types of tick, where they’re found, and the diseases they’re capable of transmitting:

Common to the Northeast and upper Midwest, these ticks are active all times of year and can carry Lyme’s disease, Anaplasma phagocytophilum (anaplasmosis), B. miyamotoi disease, ehrlichiosis, babesiosis, and Powassan virus

Endemic to the entire US, the name of this tick is a bit of a misnomer as they are perfectly happy to munch on human victims wherever available. Can carry Rocky Mountain Spotted Fever

Distributed across in the states on the Gulf of Mexico and much of the Atlantic seaboard, these ticks can carry spotted fever

This aggressive species of tick is most commonly found in southeastern states but has shown up on occasion in the Midwest and Northeast. It can carry both Ehrlichia chafeensis and Ehrlichia ewingii (which can lead to human ehrlichiosis), Heartland virus, tularemia, STARI, and Alpha-gal syndrome

This tick is most commonly found at high elevations in the Rocky Mountain states and western Canada. It can carry Colorado tick fever, tularemia, and Rocky Mountain spotted fever

Where are Ticks Most Commonly Found

In terms of the habitats in which ticks do most of their human-hunting, this subtopic is best approached by highlighting the places to avoid, which include the following:

Ticks are surprisingly fussy about exactly which part of your anatomy they put their fangs into and in many cases will scour your body or clothing for several hours until finding a suitable spot.

Most of the time, they aim for areas most prone to perspiration: our crotch, our posterior, armpits, behind our knees and elbows, and our scalp. Bear in mind, however, that they tend to be very human-like in their appetites when hungry—i.e. they’ll take a Domino’s (your calf or forearm, say) when they can’t find their way to the Ritz (crotches, armpits, posteriors, etc.).

Different varieties of tick are more or less active at different times of year, but for the most part each species’ population reaches its peak in spring and summer months, usually from April through September.

Typically, the highest-risk periods for tick-borne diseases are spring and early summer, when ticks are still in the early stages of their annual development and known as “nymphs” (not as kinky as it sounds, I assure you). Nymphs are usually small (and, as such, more difficult to detect) but carry larger amounts of the pathogens that can cause disease.

How Ticks Do Dinner

Ticks are opportunistic creatures, spending most of their time patiently lying in wait for worthy meals in tall grass, logs, piles of leaves, shrubs, and any of the other locations mentioned above. When a suitable victim passes their perch, they hop onto that victim and start seeking a suitable portion of their anatomy to feed on.

When they find what they want, the tick starts to cut the victim open with its sharp mouth and burrow into the skin. After the hole is big enough, the tick sticks its feeding tube right into the capillary and starts sucking as fast as it can. The feeding tube has barbs to keep it in place, which is why it’s so difficult to remove a tick when one has managed to lodge itself in your skin.

It’s not always painful to be bitten by a tick. Sometimes, they will secrete a small amount of saliva that works like an anesthetic to keep you from feeling anything at all. As such, if the tick finds a place on your body without a lot of nerve endings it can feed for several days entirely unnoticed, which makes the end-of-day buddy check mentioned below all the more important. Finally, when the tick has had its fill and engorged itself by feeding on your blood, it will disengage, drop to the ground, and then await its next victim.

Symptoms of a Tick Bite

Tick bites can manifest in a number of ways. If you are allergic to tick bites you may experience the following:

More common reactions to tick bites or symptoms of a tick-borne disease include:

Ticks are vectors for a large number of illnesses, varying from the mildly unpleasant to the debilitating and life-threatening. Rather than bombard you with pages of grim reading, click on the links to learn more about any of the following tick-borne diseases:

Spread by the deer tick, is probably the most infamous of all tick-related illnesses owing to the difficulty entailed in diagnosing the disease and its ability to cause the bite victim chronic illness for the remainder of their life if not treated quickly enough. The symptoms of Lyme disease include fever, headaches, fatigue, and a ring-like skin rash known as erythema migrans.

If bitten by a tick carrying Lyme disease, the first 48 hours are essential to the chances of making a full recovery and bite victim must seek medical help as soon as symptoms develop.

This is carried mainly by the Rocky Mountain wood tick and is a severe infectious disease with a mortality rate of more than 20 percent. A tick needs to be attached for more than two hours before the disease can be transmitted, so early detection is imperative. The main symptom is a full-body rash that usually develops 2-6 days after the bite.

Check out our other guides on health & survival:

How to Prevent Ticks from Biting You

A number of measures can be taken to minimize your chances of being bitten by a tick. I’ve included the most important ways on how to prevent tick bites below:

How to Remove a Tick Safely

Let’s start with how not to remove a tick safely:

Instead, take the following steps: 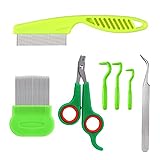 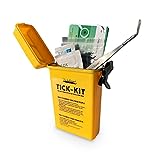 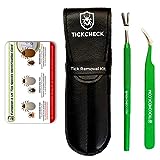 The mere thought of having a tick lodged into any part of your anatomy is enough to fill many hikers and campers with equal measures of dread and disgust. Being bitten by a tick, granted, isn’t on anyone’s “tick list” (last pun, I promise!) of desirable outdoor experiences, but it shouldn’t deter you from getting outside or cause you unreasonable apprehension when planning a trip in the outdoors.

Just by reading this article you’ve put yourself one step ahead of the game and equipped yourself with all the “beta” you need to get your wander on in tick country without fear of becoming tick-food or victim of a tick-borne illness along the way!

Check out our buyer’s guides for health & survival products: